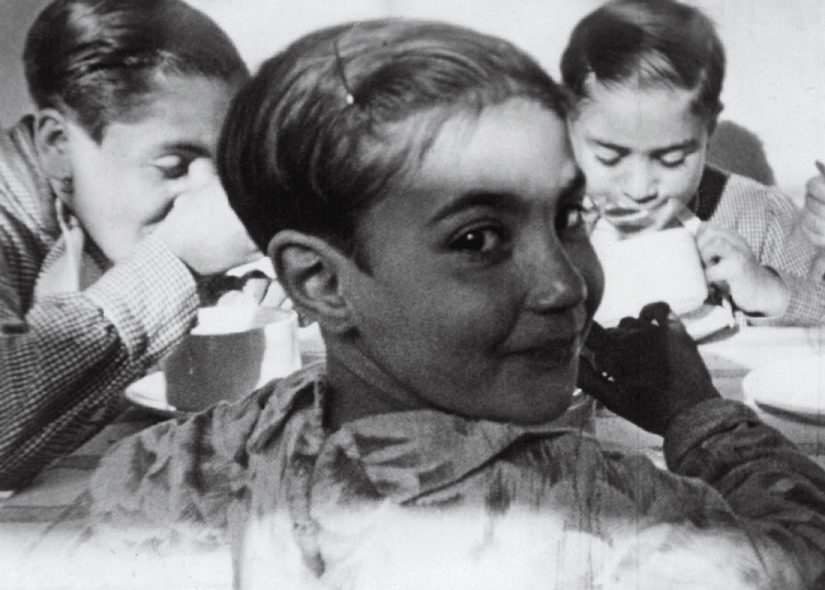 During the Spanish Civil War in the 1930s in the remote mountain village of Villar del Cobo, the children of the Martinez Lopez family were separated from each other. Their father had died some years earlier, and when their mother, Manuela, was hospitalized for a time, two of the children, Ernesto and Cristobalina, were placed in a childrens home in a nearby town. Before their mother was able to bring the two children home again, Cristobalina was adopted by a Norwegian relief worker.

Made by hand. If you Google that statement, you will be met by a torrent of design products. We are ready to pay extra for something that has been made with care by human hands rather than having been produced by machines. Eva Koch’s work Made by hand is shown on two closely juxtaposed screens …

Made by hand Read More » 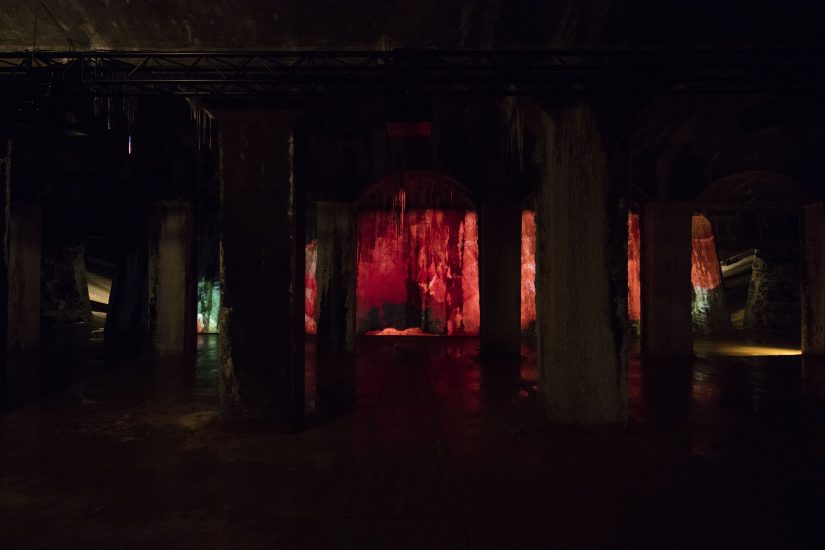 Eva Koch’s video installation That Dream of Peace is a site-specific work created for a quite special urban space in Copenhagen: The Cisterns under Søndermarken, a former water reservoir that dates back to 1856. Dark, cold and damp the rooms with their dripstone formations remind one both of dripstone caves in nature but also of …

That Dream of Peace Read More » 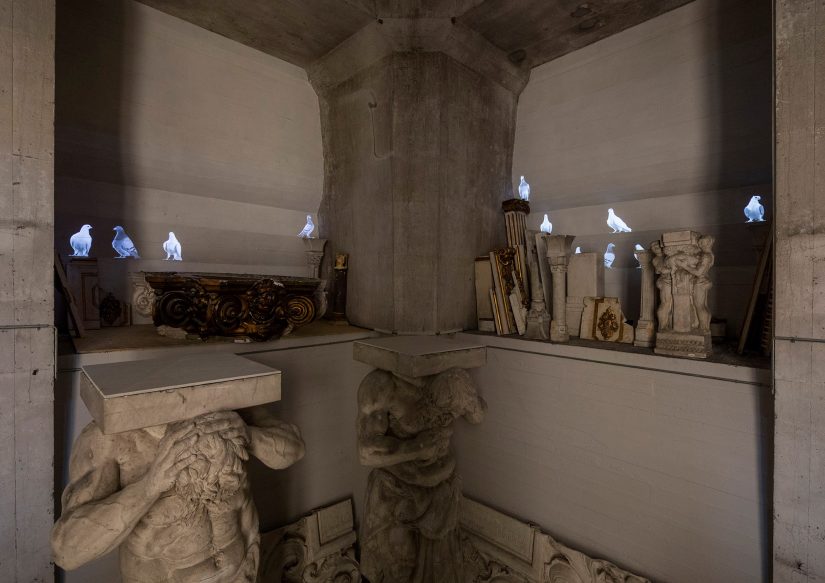 Pigeons live in the wild, but they also live in myths, in our collective memory, in poetry and in pictures. Now we are in the tower of Christiansborg Palace, the seat of the Danish Parliament. In that connection one might come to think of the fact that politicians may be ”doves” seeking compromise for the sake of a greater cause. 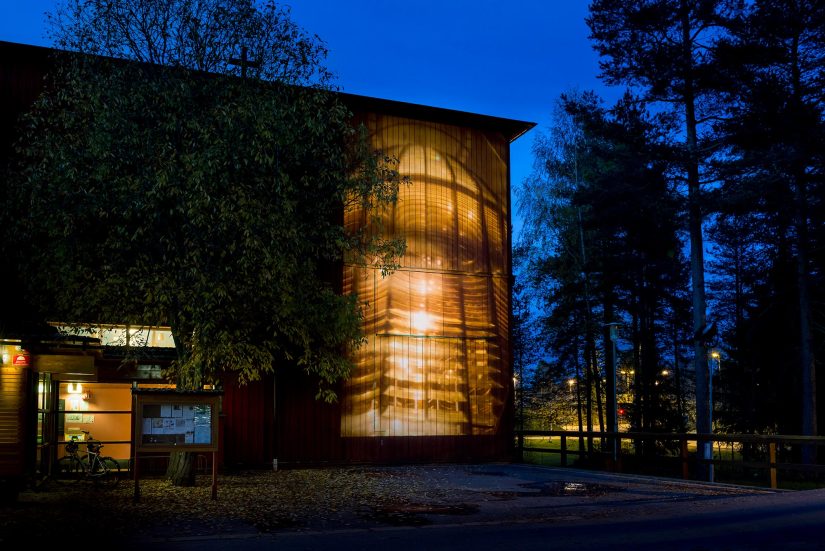 A lighthouse is a point of orientation for the seafarer, a series of penetrating flashes telling the mariner that the coast is directly ahead of him and that he must set his course in accordance with this information. If one has been at sea for a long time, the flashes of the lighthouse may seem … 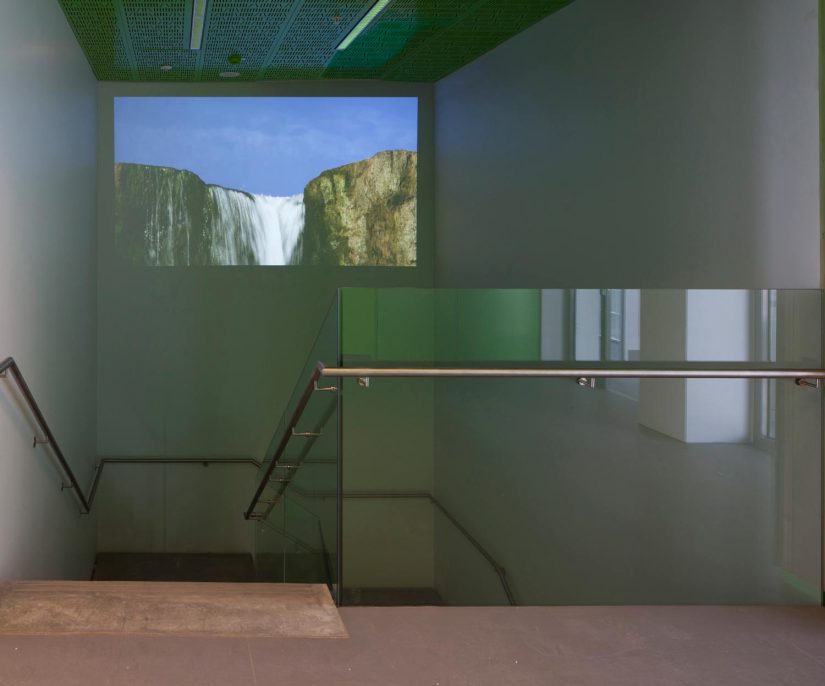 In the Copenhagen University building, KUA 2 on Amager, Eva Koch has installed 5 video projections in the stairwell 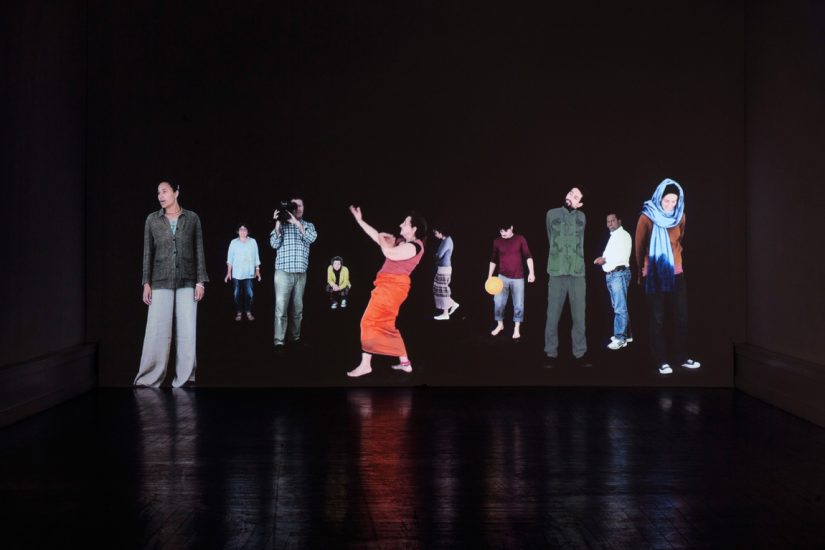 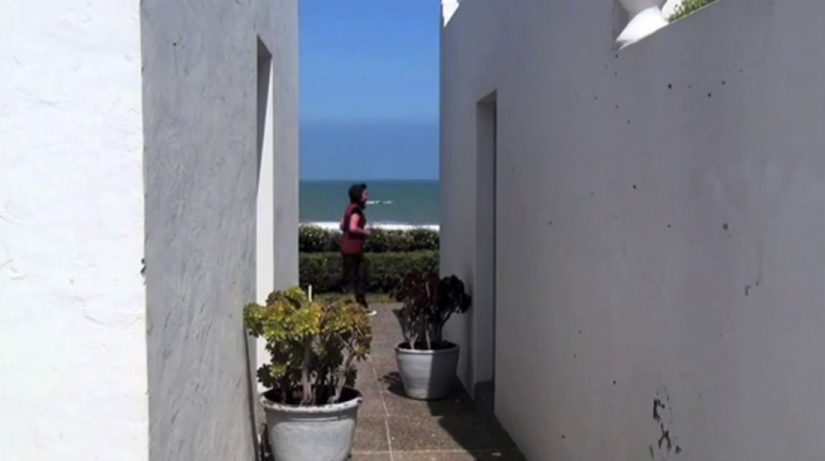 A concrete and a metaphorical self-portrait of the artist, Eva Koch.

Time has been slowed down so that the human eye can follow the water’s wild, uninterrupted fall from top to bottom. There is a certain meditative calm about it, but fierce white noise of the sound track adds a powerful energy to the impression made by the installation. Standing in front of this reproduction of a natural phenomenon that has surprisingly been moved into the centre of the city, the visitor has a physical sense of the huge forces of nature, and the smallness of his or her own body. 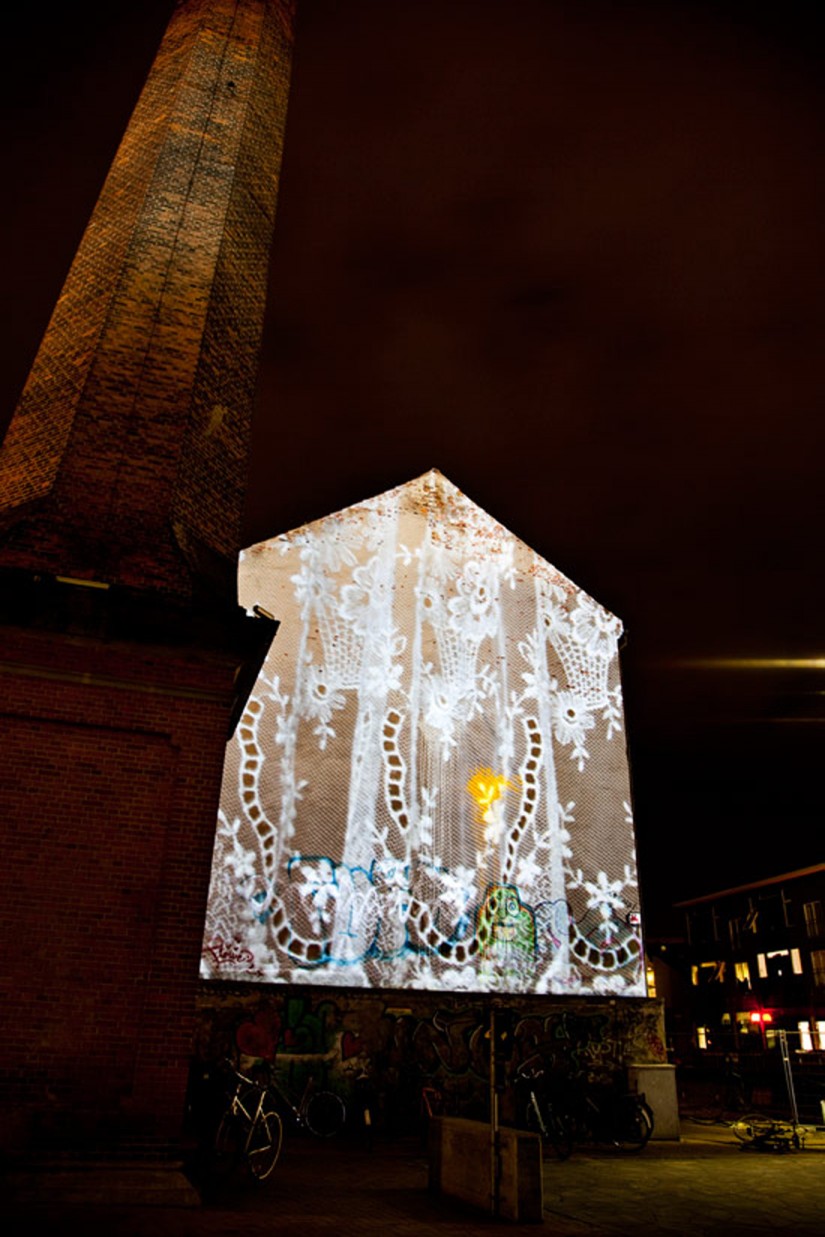 June’s Lace is an exhibition in three parts: an outdoor video projection, a video installation for three projectors and a poem. The installations can be seen as existential and philosophical readings of the lace curtain. 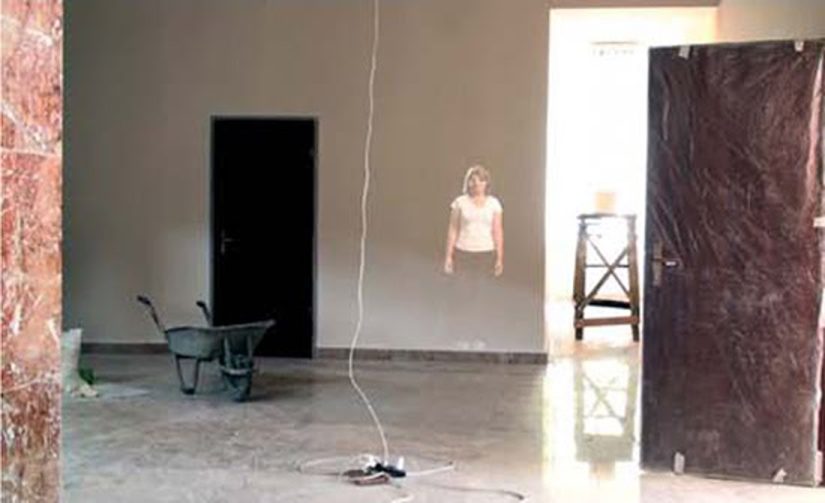 The idea of our common humanity permeates Eva Koch’s installation Portraits from Bina. This is a site-specific work for the House of Culture in Bina, a suburb of Baku, the capital of Azerbaijan. 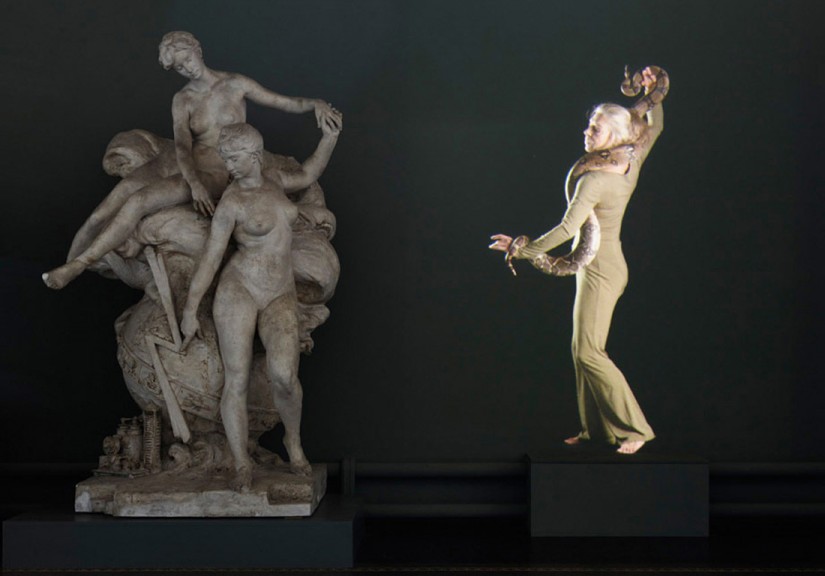 The video work Salammbô takes its departure in Gustave Flauberts novel Salammbô from 1862 and was created in a dialogue with Jean-Antoine-Marie Idracs neoclassicist sculpture of the same name from 1903 (at the Ny Carlsberg Glyptotek, Copenhagen). 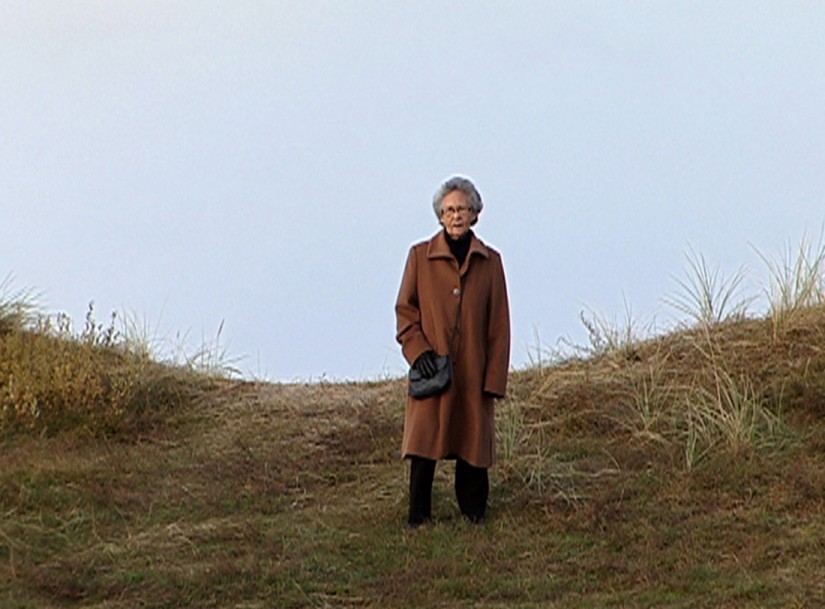 This project aims to give Augusta a glimpse of her Greenlandic family and at the same time produce a living portrait that places the family in the Greenlandic landscape, but, as the video shows, the weather is an incalculable factor. 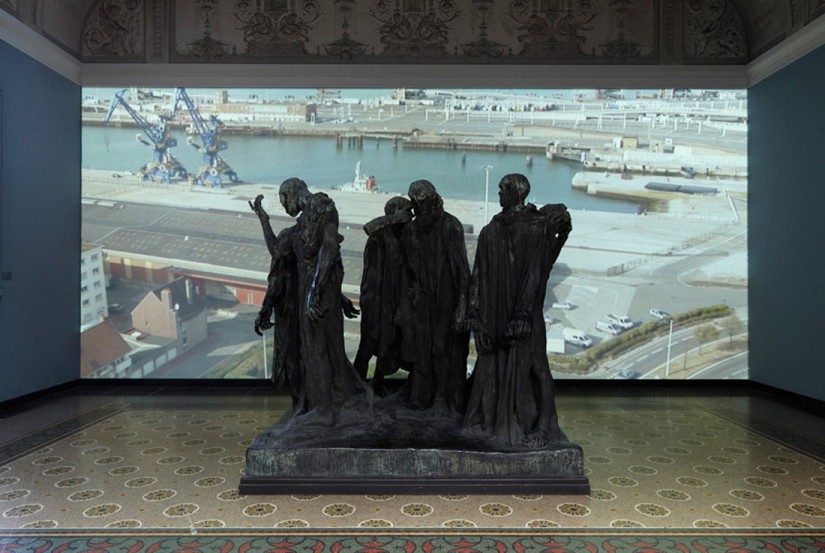 Calais is a video and sound work created for Auguste Rodin’s dramatic sculptural group The Burghers of Calais (the Ny Carlsberg Glyptotek, Copenhagen). Rodin’s work is an interpretation of the legend about the 6 leading citizens of Calais who in 1347 offered to sacrifice themselves in order to save their fellow citizens during the English siege of the city. 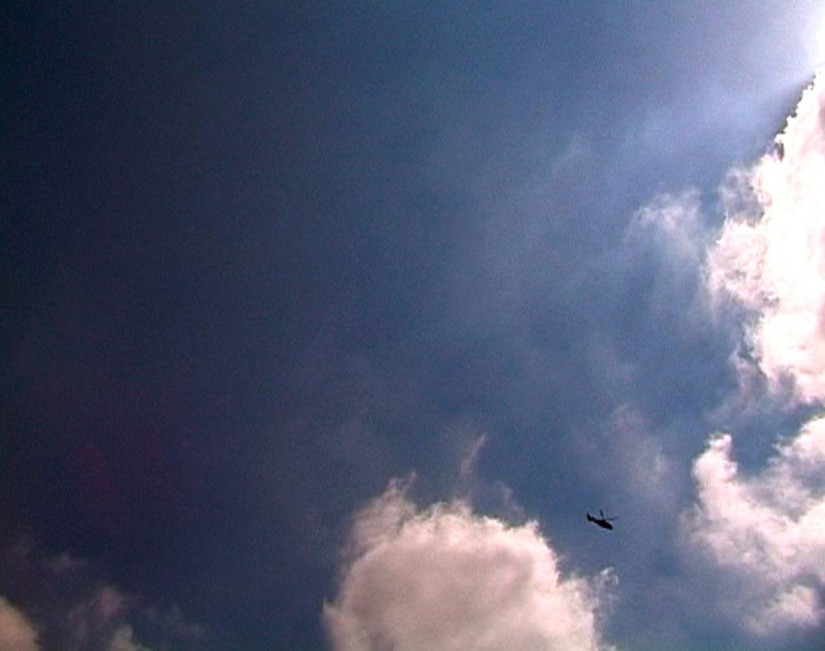 Eva Koch’s video installation Confer consists of two projections set opposite each other. On one projection we see a contrabass, which is filmed so close up that the instrument seems to be physically present. On the other projection we follow a helicopter against the background of a lightly clouded sky. There is no immediate encounter between the two pictures, a contrabass and a helicopter. 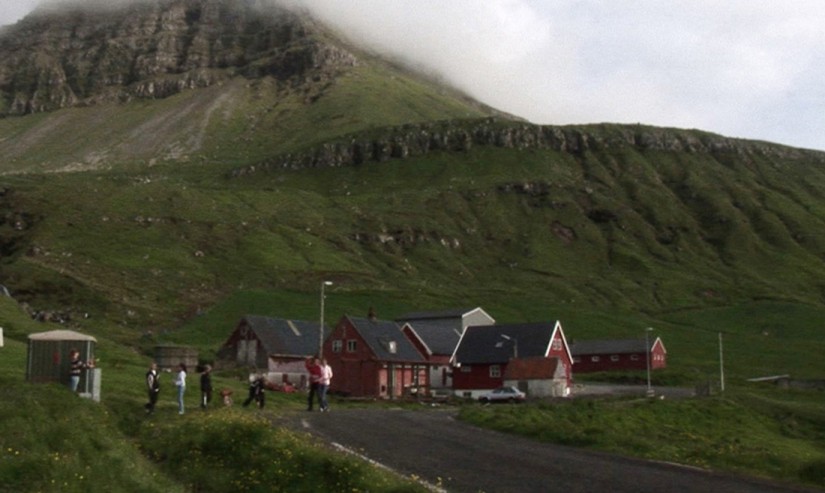 The video installation “Evergreen” is about the power of the group and about the cruelty inherent in us that can mercilessly exclude an individual from the group. This is set in the overwhelming and beautiful landscape of the Faeroe Islands. The choice of setting is partly autobiographical, but group pressure and mobbing can take place … 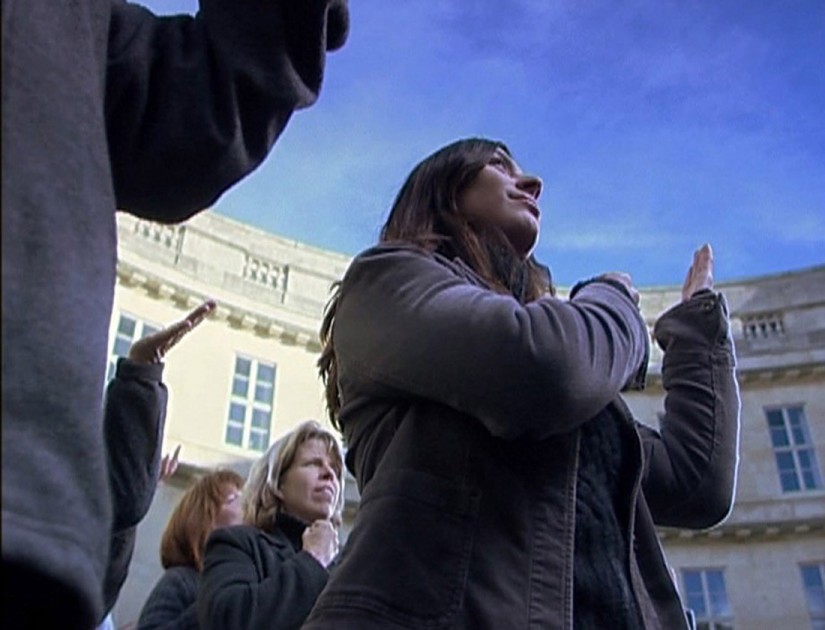 A video installation about communication. The sound track and the visuals tell the same story, but in different languages, the spoken and sign language. Caught between these two languages, we are in a field of interpretation. Even though we speak the same language, it is not given that we understand the same thing. 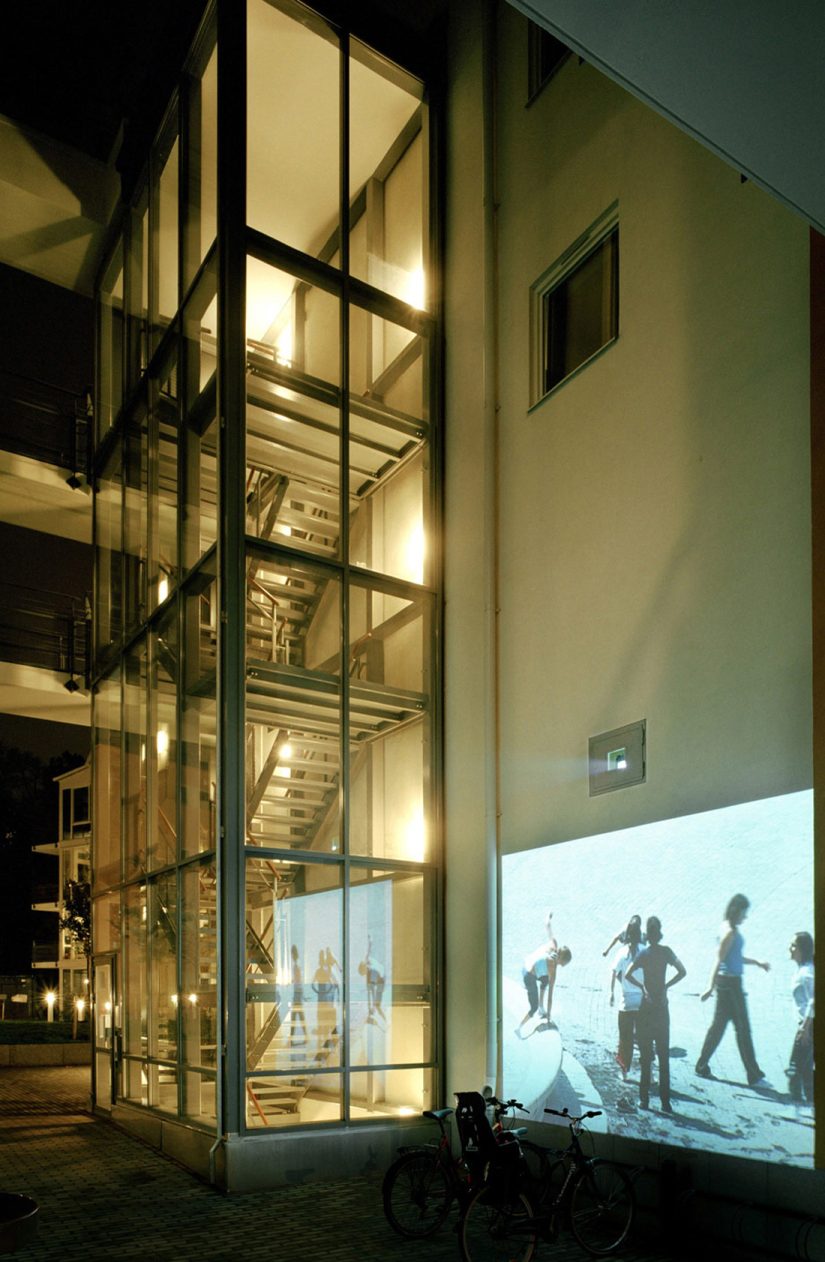 The project is a video work, divided between two blocks with each locality showing an extreme point of the ‘same’ story. The video sequences are projected directly onto the outer walls and can be seen from dusk to sunrise. The work establishes a special experiential space as darkness falls. 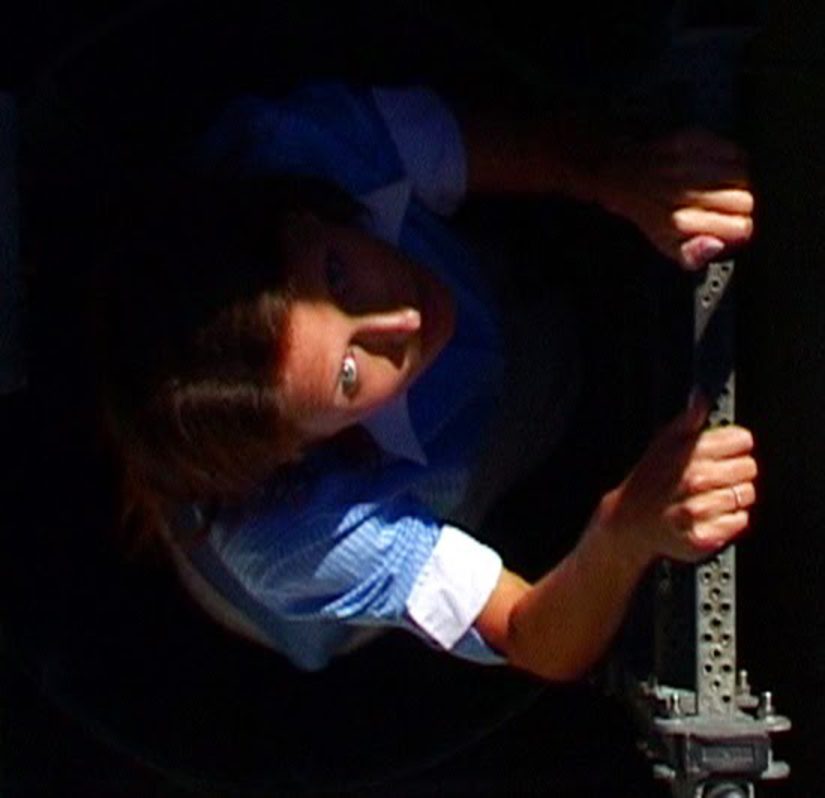 Eva Koch’s video installation UP is a loop that shows people coming up out of a subterranean shaft. As a projection it has a diameter of about 60 cm. Projected onto a street or pavement where many people pass by, it will provide a moment of surprise, a little intervention that some will pass by with a quick glance, while others may pause for a moment to wonder what is going on. 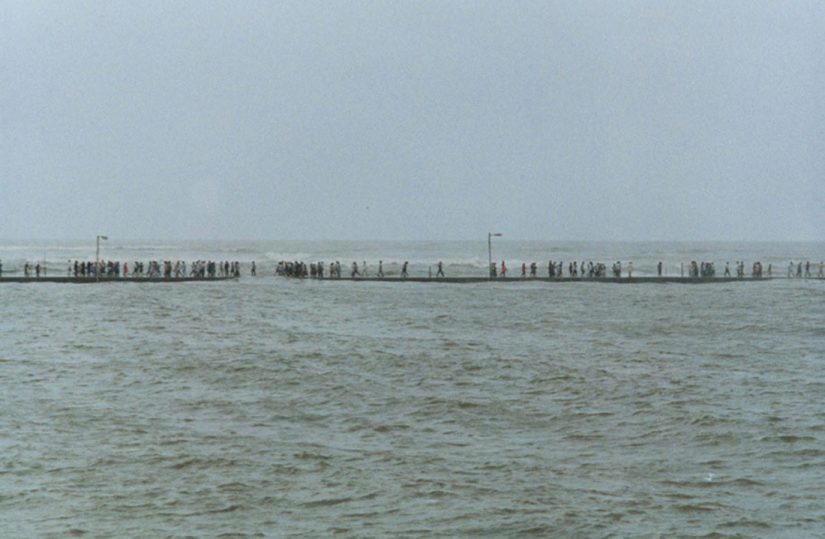 On a thin line, a narrow mole extended between sky and sea, human figures walk and walk. Their passage is not without risk. Powerful waves are constantly crashing on the mole, sweeping over the mole and the walkers. 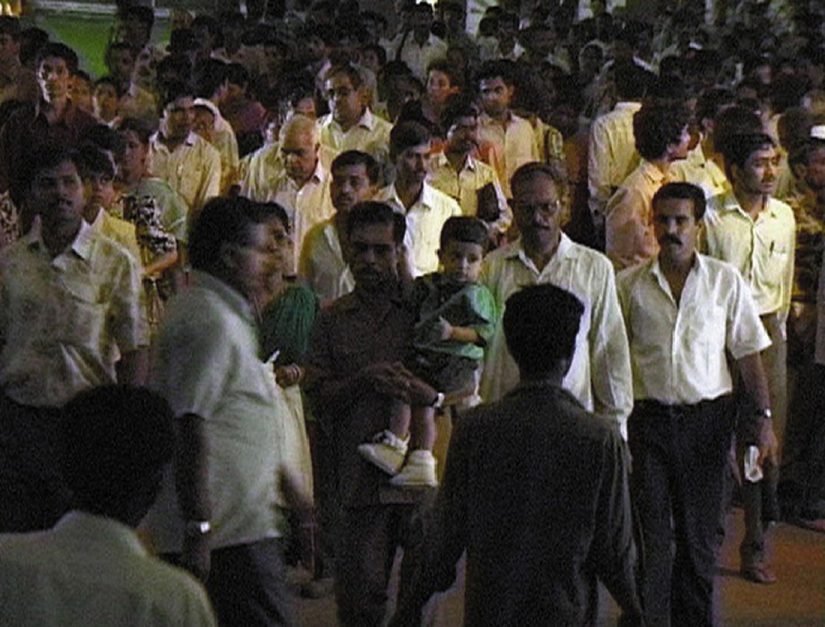 In “Crowds”, the large video installation from 1997, Eva Koch has placed herself in the middle of the crowd of three major cities: Jerusalem, Bombay and Hong Kong, and allowed the camera to roll. 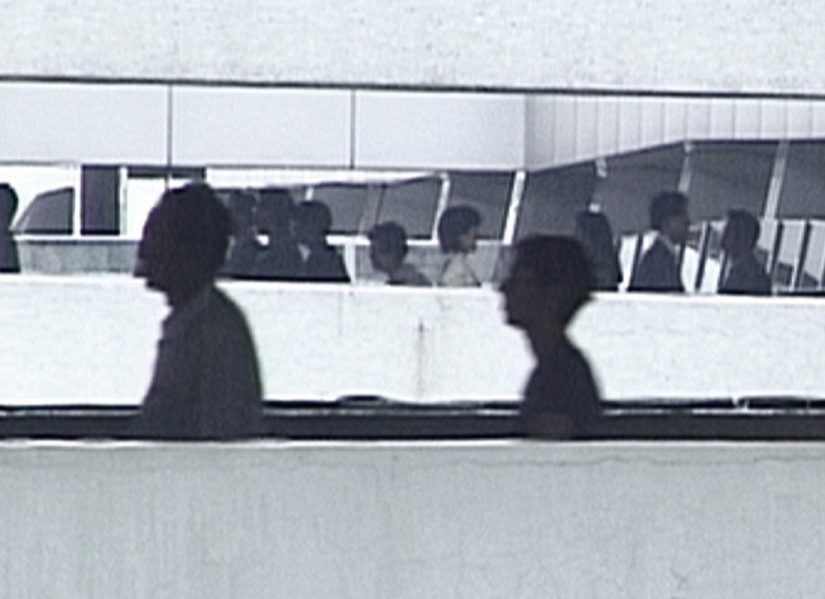 The video Transit is about being on one’s way, ‘in the gap’, between here and there. Transit means the state of being moved.